How to Test a Diode using Multimeter

Many digital multimeters (DMMs) have a diode test function that provides a convenient way to test a diode. A typical DMM has a small diode symbol to mark the position of the function switch. When set to diode test, the meter provides an internal voltage sufficient to forward-bias and reverse-bias a diode. This internal voltage may vary among different makes of DMM, but 2.5 V to 3.5 V is a typical range of values. The meter provides a voltage reading or other indication to show the condition of the diode under test.

When the Diode Is Working

In Figure (b), the diode is turned around for reverse bias as shown. If the diode is working properly, you will typically get a reading of “OL”. Some DMMs may display the internal voltage for a reverse-bias condition.

When the Diode Is Defective

When a diode has failed open, you get an out-of-range “OL” indication for both the forward-bias and the reverse-bias conditions, as illustrated in Figure (c). If a diode is shorted, the meter reads 0 V in both forward- and reverse-bias tests, as indicated in part (d). 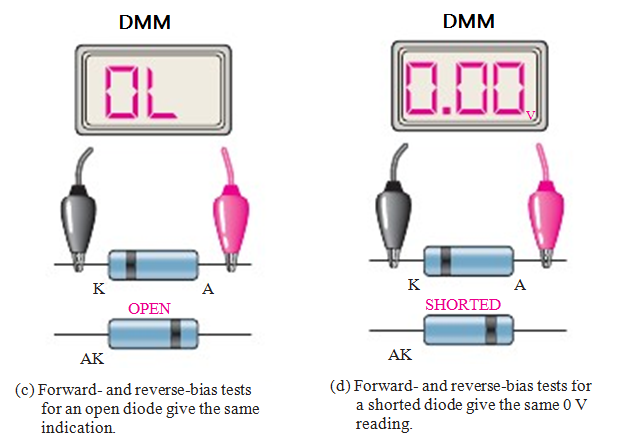 Checking a Diode with the OHMs Function

DMMs that do not have a diode test position can be used to check a diode by setting the function switch on an OHMs range. For a forward-bias check of a good diode, you will get a resistance reading that can vary depending on the meter’s internal battery. Many meters do not have sufficient voltage on the OHMs setting to fully forward-bias a diode and you may get a reading of from several hundred to several thousand ohms. For the reverse-bias check of a good diode, you will get an out-of-range indication such as “OL” on most DMMs because the reverse resistance is too high for the meter to measure.

Even though you may not get accurate forward- and reverse-resistance readings on a DMM, the relative readings indicate that a diode is functioning properly, and that is usually all you need to know. The out-of-range indication shows that the reverse resistance is extremely high, as you expect. The reading of a few hundred to a few thousand ohms for forward bias is relatively small compared to the reverse resistance, indicating that the diode is working properly. The actual resistance of a forward-biased diode is typically much less than 100 .

What is the difference between Fan and Blower? Fan is an air pushing device. Either Axial or Centrifugal type systems are used to move the ...