The symbol for a zener diode is shown in Below Figure. Instead of a straight line representing the cathode, the zener diode has a bent line that reminds you of the letter Z (for zener). 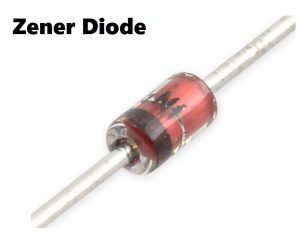 A zener diode is a silicon pn junction device that is designed for operation in the reverse-breakdown region. The breakdown voltage of a zener diode is set by carefully controlling the doping level during manufacture. 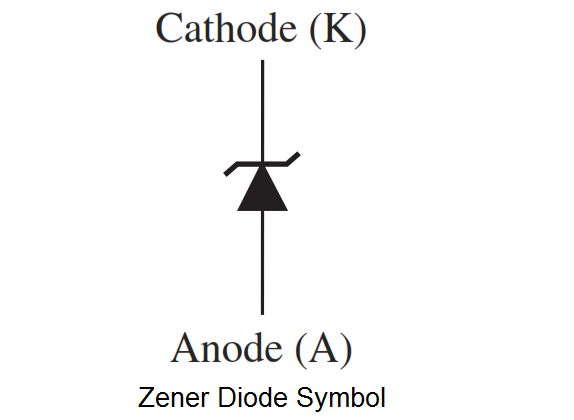 From the discussion of the diode characteristic curve in previous article, that when a diode reaches reverse breakdown, its voltage remains almost constant even though the current changes drastically, and this is the key to zener diode operation. This volt-ampere characteristic is shown again in Below Figure with the normal operating region for zener diodes shown as a shaded area. 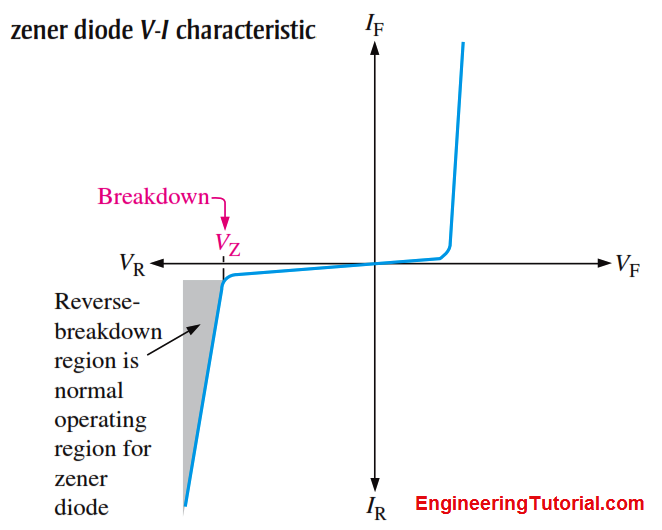 Zener diodes are designed to operate in reverse breakdown. Two types of reverse breakdown in a zener diode are avalanche and zener. The avalanche effect occurs in both rectifier and zener diodes at a sufficiently high reverse voltage. Zener breakdown occurs in a zener diode at low reverse voltages. A zener diode is heavily doped to reduce the breakdown voltage. This causes a very thin depletion region. As a result, an intense electric field exists within the depletion region. Near the zener breakdown voltage (V), the field is intense enough to pull electrons from their valence bands and create current. 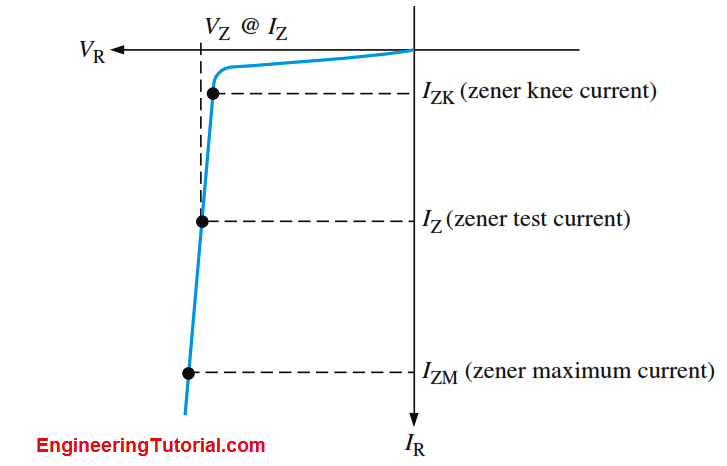 Fig : Reverse characteristic of a zener diode. VZ is usually specified at a value of the zener current known as the test current.

A minimum value of reverse current, IZK, must be maintained in order to keep the diode in breakdown for voltage regulation. You can see on the curve in Above Figure that when the reverse current is reduced below the knee of the curve, the voltage decreases drastically and regulation is lost. Also, there is a maximum current, IZM, above which the diode may be damaged due to excessive power dissipation. So, basically, the zener diode maintains a nearly constant voltage across its terminals for values of reverse current ranging from IZK to IZM. A nominal zener voltage, VZ, is usually specified on a datasheet at a value of reverse current called the zener test current. 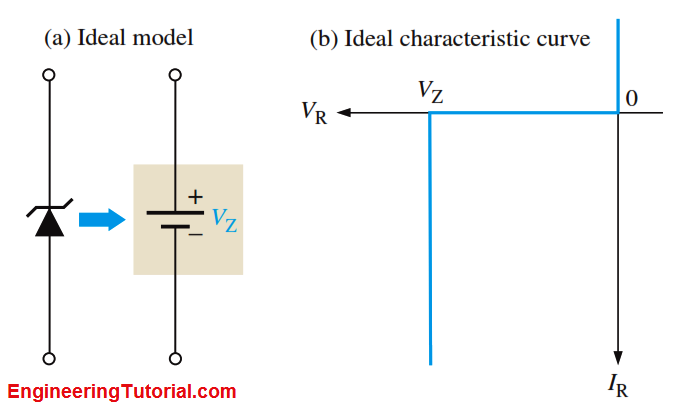 Below Figure (a) represents the practical model (second approximation) of a zener diode, where the zener impedance (resistance), ZZ, is included. Since the actual voltage curve is not ideally vertical, a change in zener current (ΔIZ) produces a small change in zener voltage (ΔVZ), as illustrated in Below Figure (b). By Ohm’s law, the ratio of ΔVZ to ΔIZ is the impedance, as expressed in the following equation:

Normally, ZZ is specified at the zener test current. In most cases, you can assume that ZZ is a small constant over the full range of zener current values and is purely resistive. It is best to avoid operating a zener diode near the knee of the curve because the impedance changes dramatically in that area. 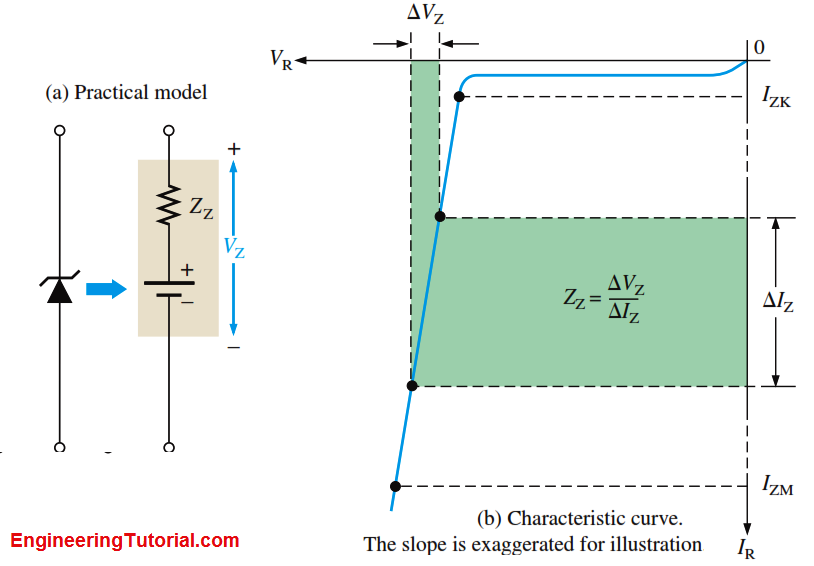 For most circuit analysis and troubleshooting work, the ideal model will give very good results and is much easier to use than more complicated models. When a zener diode is operating normally, it will be in reverse breakdown and you should observe the nominal breakdown voltage across it. Most schematics will indicate on the drawing what this voltage should be.

A major application for zener diodes is as a type of voltage regulator for providing stable reference voltages for use in power supplies, voltmeters, and other instruments.

There are two distinct mechanism due to which breakdown may occur in the zener diode. They are given below
The different breakdowns are usually differentiated on the basis of doping concentration. When the PN- junction is highly doped, the zener breakdown occurs while avalanche breakdown occurs only when the PN- junction is very lightly doped.
1. Zener Breakdown :
The Zener breakdown occurs when the reverse bias voltage across a p-n junction is sufficiently high, so that the resulting electric field at the junction exerts a large force on a bound electron to tear it out of its covalent bound. Thus a direct rupture of the covalent bounds produces a large number of electron-hole pairs, thereby increasing the reverse current. This process is referred to as Zener breakdown. Since the breakdown voltage decreases as junction temperature increases, it negative temperature coefficients.
2. Avalanche Breakdown :
A thermally generated carrier falls down the junction barrier and acquires energy from the applied potential. This carrier collides with a crystal ion and imparts sufficient energy to disturb a covalent bond. In addition with the original carrier, a new electron-hole pairs has been created. This carriers may also pic up sufficient energy from the applied field, collide with another crystal ion and still create another electron-hole pairs. This process is known as Avalanches multiplication. In this the breakdown voltage increases with increase in temperature. The zener diodes have breakdown voltage range from 3V to 200 V.
Zener Diode Applications
The various applications of zener diode are,

While filters can reduce the ripple from power supplies to a low value, the most effective approach is a combination of a capacitor-input filter used with ...