The below Fig. (i) shows CE transistor circuit while Fig.(ii) shows the output characteristcs along with the d.c. load line.

(i) Cut off. The point where the load line intersects the IB = 0 curve is known ascut off. At this point, IB = 0 and only small collector current (i.e. collector leakage current ICEO) exists. At cut off, the base-emitter junction no longer remains forward biased and normal transistor action is lost. The collector-emitter voltage is nearly equal to VCC i.e. VCE (cut off) = VCC

(ii) Saturation. The point where the load line intersects the IB = IB(sat) curve is called saturation. At this point, the base current is maximum and so is the collector current. At saturation, collector-base junction no longer remains reverse biased and normal transistor action is lost.

If base current is greater than IB(sat), then collector current cannot increase because collector-base junction is no longer reverse-biased.

Note. We provide biasing to the transistor to ensure that it operates in the active region. The reader may find the detailed discussion on transistor biasing in the next chapter. 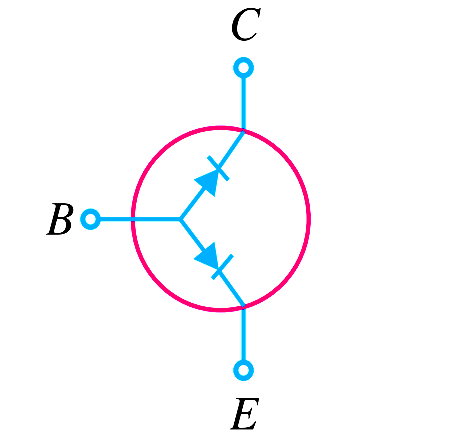 Summary. A transistor has two pn junctions i.e., it is like two diodes. The junction between base and emitter may be called emitter diode. The junction between base and collector may be called collector diode. We have seen above that transistor can act in one of the three states : cut-off, saturated and active.The state of a transistor is entirely determined by the states of the emitter diode and collector diode [See Above Fig]. The relations between the diode states and the transistor states are :

CUT-OFF : Emitter diode and collector diode are OFF.

SATURATED : Emitter diode and collector diode are ON.

Current flows from a three-phase generator on the left, represented as three Y-connected single-phase sources, via a transmission line into a symmetric Y-connected load on ...