Losses are the wastage of energy in the device which will affect the overall efficiency of the device. So the losses of the device should be known to design the component with minimum losses. Transformer is an electrical isolation component which transfers the power from primary to secondary without any physical contact. In power transmission from primary and secondary, there are losses in the transformer which are bases on load of the transformer i.e. No-load losses and Load Losses.

PLL   = Load losses in the transformer.

No Load Loss of Transformer 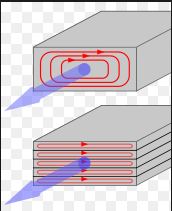 For distribution transformers no load losses are typically less than 5% of the rated current. Hysteresis losses and eddy current losses contribute over 99% of the no-load losses.

Load losses are caused by the winding impedance and vary according to the loading on the transformer. Transformer load losses can be divided into two parts:

They include heat losses (I2R) and eddy currents in the primary and secondary conductors of the transformer. Heat losses, or I2R losses, in the winding materials contribute the largest part of the load losses. They are created by resistance of the conductor to the flow of current or electrons.

How to measurement of Losses 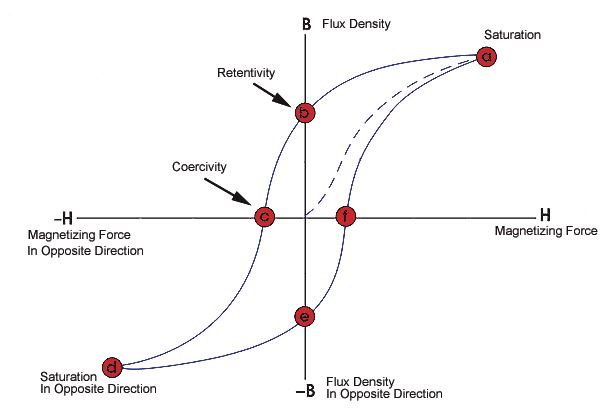 By applying external magnetic field the magnetic material will get magnetized. The extent the material gets magnetized depends on the applied field and the permeability of the material (µr). The magnetization, flux density inside material.

Magnetic hysteresis can be explained as follows: Ferromagnetic materials such as iron consist of domains in their internal structure. The size of the domain will be ranging from 1 micro m to 1 mm. These domains consist of a number of magnetic dipoles which are parallel with respect to one another inside the domain. Every atom in ferromagnetic material has contains of unpaired spinning electrons which acts as magnetic dipoles. Hence every atom has non zero magnetic moment associated with it. Due to random orientation of domains at no applied magnetic field the net magnetization in a ferromagnetic material will be zero.

Therefore the materials with less area inside the hysteresis loop are preferred for transformer cores.

According to Steinmetz’s formula, the heat energy dissipated due to hysteresis is given by

Hysteresis loss is thus given by

f is the frequency,

η is the hysteresis coefficient and

βmax is the maximum flux density, the empirical exponent of which varies from about 1.4 to 1 .8 depending on the material used for core but is often given as 1.6 for iron.

Air core transformer eliminates loss due to hysteresis in the core material but has more leakage flux. Air core provides very low inductance in most situations. Hence it is not a plausible solution.

Origin or Cause of eddy currents

When time varying magnetic flux flows in the Ferromagnetic core, an emf is induced in the core in accordance with the Faraday’s law.

B is magnetic flux density,

S is the surface though which flux flows.

According to Lenz’s law this EMF is induced in a direction opposing the original field producing it. This induced emf will produce local currents in the conducting core normal to the magnetic flux these currents are called eddy currents.

The field produced by this time varying eddy currents try to nullify the fields inside the core. Hence these currents flow within the skin depth of core near the surface. This is termed as skin effect. The magnitude of Ac current density inside the core can be approximated as

Where the direction of energy propagation is thought to be in Z direction,

α is the attenuation constant =

where f is the frequency of alternating current,

µr is the relative magnetic permeability of core,

σ is the conductivity of core,

The skin depth is defined as the distance within which the fields reduce to 1/e of its maximum value. Skin depth is the characteristic of the material which also depends on the frequency of the time varying magnetic field. The skin depth is denoted by δ and is given as

The resistance of the core for alternating currents will be different from the DC resistance (L/(σ*A)) where L is the length of core and A is the area of the core. The effective resistance due to skin effect for long cylindrical conductor such as a wire, having a diameter D large compared to δ, has a resistance approximately that of a hollow tube with wall thickness δ carrying direct current is given as

Due to finite resistivity of core these eddy currents leads to power dissipation in the core.

f is the frequency of the external magnetic field,

B is flux density,

Kh, Ke and n are the coefficients, which depend on the lamination material, thickness, conductivity, as well as other factors. However, this formula is only applicable under the assumption that the maximum magnetic flux density of 1.0 Tesla is not exceeded and the hysteresis loop is under the static situation.

In transformers eddy current loss is undesirable and can be reduced by using the core materials that havehigh permeability but low conductivity. Soft ferrites are such materials.

For low frequency high power applications laminated cores out of stacked ferromagnetic sheets each electrically insulated from its neighbors by thin oxide coatings (insulator). The insulating coatings parallel to the direction of magnetic flux so that eddy currents normal to the flux is restricted to the laminated sheets. The eddy current power loss decreases as the number of lamination’s increases.