Bharadwaj
0
Geothermal Energy
Beautiful valleys, cool and silent forests, peaceful oceans. How much attractive this Earth is? Let us now think about the origin of the world. It is thought to be created by super explosion,the Big bang. How  there are theories that states different principles for the creation of world. But Big bang theory got most acceptance because it’s theories were trustworthy. One of the most important thing that leads to the wide acceptance of Big bang theory was, the Earth center is still full of super hot magma.

We know that through weak Earth crust some amount of magma get exhausted to the atmosphere within certain interval, in some specific areas, volcanoes. Also, there are some other places where high pressure steam is exhausted from the Earth crust without any external heat supply. It is due to the boiling of water in under water reservoirs due to the nearness of hot magma. When man realized that traditional energy energy sources are limited, they started to think about other energy sources. Some engineers discovered that, these geothermal areas are energy reservoirs. It is possible to draw energy from geothermal areas by implementing geothermal power stations.Unlike other renewable energy resources, like wind energy or wind power, solar power,tidal power, geothermal energy has a special characteristics or a plus point. Geothermal energy is not affected by climate changes. If there is no wind, wind mills are inactive. It is impossible to produce electric energy during night or at cloudy days using solar panels. Literally, geothermal energy is independent on climate conditions. Geothermal power plants are power houses which produces electric power by harvesting the geothermal energy by using special equipments installed at geothermal areas. Geothermal energy is 100% ecofriendly because it is completely emission free.

Geothermal energy – Use and working principle

Through this article I will present geothermal energy working principle used for building heating and generating electricity (simplified version). First step needed is to extract the geothermal energy from steam, hot water and hot rocks from Earth’s crust. The success of this process depends on how hot the water gets, and water temperature depends on how hot were rocks to start with, and how much water is pumped down to these rocks. The water is pumped down through an „injection well“, it passes through the cracks in these rocks and then comes back up again through a „recovery well“ towards the surface, and because of the great pressure water is transformed into a steam when getting to the surface. 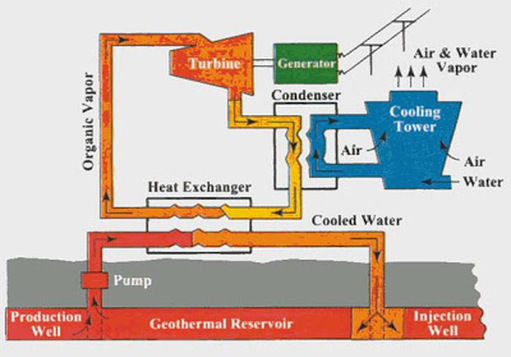 This created steam then needs to be separated from brine what is usually done in central separation chamber. After this process of separation is over, complete steam is transferred to heat exchangers which are located inside the power plant. After steam is transferred to heat exchangers it’s possible to transfer it even further to the steam turbines where it can be generated into electricity, and in the same time through the exhaust pipes unused energy is being released.In heat exchangers steam is being cooled under the pressure in condensate and after that heat is transferred into cold water in condensate heat exchangers. This cold water that is gained on this way gets pumped from wells to storage tanks from which is transferred to heat exchangers where water’s temperature gets increased and then passes through deaerators where it boils and where released oxygen and other gases that could cause corrosion (when being heated) are removed by final water cooling.Speaking in simple term it’s all in the process of water heating and its transfer to steam which can be then used to drive a turbo-generator that generates electricity or this steam passes through heat exchangers and heats water creating necessary heat for central heating of households and industrial facilities.

All geothermal energy plants literally uses super hot steam to run large turbines, coupled with generators to produce electricity. In the  Geysers geothermal area, dry steam from the below ground is used directly in the steam turbine. Where as in some areas, super hot water is flashed in to steam within the power plant and that steam turns the turbine. There are another type of geothermal energy plants, where uses different type of fluid instead of hydro thermal fluids to drive the turbine by using a heat exchanges to transfer heat from the water to special fluid.

This type of power plant was first used at Lardarello in Italy in 1904. Today worlds largest single source of geothermal electricity, the Geysers in Northern California uses this direct dry steam technology. Steam plant uses hydrothermal fluids that are primarily steam. The steam from the Earth directly goes to a turbine and drives it.

Hydrothermal fluids above 360 F (182C) can be used in flash plants to make electricity. Fluid is sprayed in to a tank held at a lower pressure than the fluid, causing some of the fluid to rapidly vaporize or flash. The vapour then drives the turbine, which drives the generator and produce electricity. If any liquid remains in the tank, it can be flashed again in a second tank (double flash) to extract even more energy.

Do you know, it takes millions of years to form petroleum oil. Mining and extraction equipments are expensive, that is why price of the petroleum products dramatically increasing. Some of the developed countries are now forcing companies to adopt renewable energy sources such asgeothermal energy, solar power, wind energy etc. Reducing of fossil fuel usage help up to significant cost saving and to reduce the amount of green house gases.

Since ancient times geothermal energy have been using for direct heating of homes and offices. The pure steam can directly used to warm up offices in cold climate. Also, this steam can be used for steam bathing.

There is no generation of any bi-products during the extraction of geothermal energy from the hot spot. So energy efficiency is more.

Once constructed, no more money is needed to maintain the geothermal power stations. That is, maintenance cost of geothermal energy plants are very less.

2. Suitable for geothermal areas only

3. There is a danger of eruption of volcano

Most of the hot spot in the world are situated near to the volcanoes and fault lines. So there is a risk of explosion.

4. It may release harmful gas during construction.

In some cases harmful gases may a escape from deep within the earth through the holes drilled during geothermal energy plant construction.

In a geothermal energy plant we have to pump cold water to the hot spot continuously to get continuous steam output. If we pumped an amount of water  more than a critical amount the hot spot may disappear, causing the death of geothermal potential

7. Only a fraction of earth’s crust has hot spot that are easily drilled.

Batteries in Series and Parallel Animation