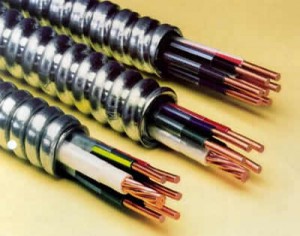 The permissible operating temperature of an overhead conductors depends on the maintenance of adequate clearances and limitations of the loss of strength through annealing. Generally, the maximum current which an over-head conductor size designed to carry must not cause it to be heated such that it may result in the annealing of the metal of the conductor or reduction in the clearances specified. Usually for normal day loading, a maximum operating temperature 75oC is permitted which is allowed to reach up to 100oC for emergency loading.

The allowable voltage drop is considered as critical factors in determining the  conductor size for 11kV and Low Tension (LT) distribution line with thermal loading (ampere loading) about 80 percent of the normal thermal rating based on the maximum operating temperature. Large conductor size (cross section) employed in distribution lines reduces the resistance of the line and hence the I2R losses and voltage drop in the line; and hence voltage regulation of the line improves. But using large cross section conductor size will increase the cost as the material required is more.

Hence an optimum value must be chosen in between the cost and improving voltage regulation while designing the conductor size for distribution power system.

The choice of conductor size from mechanical view point depends on the :

Internal Characteristics: Stranding, modulus of electricity, thermal expansion of the creep. For example, considering the creep and economics AAC is used in LT distribution lines. The line characteristics includes voltage regulation is influenced by distribution line parameters and system frequency, current carrying capacity is assessed from the heat balance (amount of heat generated and heat dissipated).

While choosing the conductor size for continuous rating, proper care should be taken of all the rating factors depending on actual conditions of installation. Like any other equipment selection, current carrying rating of the cable is governed by permissible rise in temperature of the cable which the insulation provided to the cable should have to withstand. This depends on the amount of heat produced and the surrounding temperature of the soil. The current rating of the cable apart from the above factors also depends on the large number of factors such as method of cable laying employed, spacing between the cables, number of cores of the cable and thermal conductivity of the soil.

The type of system: Earthed or un-earthed?Is it solid grounding resistance/reactance grounding? The unearthed system will require full insulation from the core to the ground and the cable will be costly compared to the earthed system. For un-earthed cables, more insulation is provided in order to withstand the higher voltage stresses during the short circuit faults

The cable should be selected such a way that at full load, the voltage drop should be within the permissible limits.

Methods of installation, estimated thermal resistivity of soil, type of covering, type of armouring, the need if any for additional corrosion protection.

On the basis of the expected short circuit current and time of clearance, an appropriate conductor size for the cable may be selected. The cables should be selected such that it has to withstand stresses and temperature rise in the event of short circuit faults