What is a common Base amplifier?

Common base amplifier is on in which the base terminal is common to both input and output circuit. Following are the some of the characteristic parameters of CB amplifier neglecting the output resistance of amplifier (which accounts for early effect) are

What is a Common emitter amplifier?

Common emitter amplifier is on in which the emitter terminal is common to both input and output circuit. Following are the some of the characteristic amplifiers of CE amplifier with emitter resistance neglecting the output resistance of amplifier (which accounts for early effect) are

What is a Common collector amplifier?

Common collector amplifier is on in which the collector terminal is common to both input and output circuit. Following are the some of the characteristic amplifiers of CC amplifier are

What are the applications of transistor amplifiers?

a) The CE amplifiers are used in applications where high gain is required. It can be used as single stage or in cascade.

a) CB amplifiers have better frequency response than CE amplifier. It is used as high frequency amplifier combined with common emitter amplifier. Its low input resistance finds application in specific areas where the signal strengths are very low (or) when load on source should be very low.

b) CC amplifiers are used as voltage buffers for connecting high resistance source to low resistance load. It is used as output stage in multistage amplifier because of its low output resistance.

What is Darlington pair?

Following are some of the characteristic parameters of Darlington pair

What is cascade amplifier?

If in a cascade of stages the input impedance of one stage is high enough so that it will not be able to affect the output impedance of the preceding stage the stages are said to Non-interacting stages.

What is lower/upper cut-off frequency of non-interacting cascading stages?

What is the upper cut-off for interacting stages?

Why amplifier gains will reduce at higher frequency?

What are the types of coupling used in amplifiers?

The term Coupling occurs in multi stage amplifiers and refers to the way in which the output of one stage is connected to the input of next stage. There are mainly three types of coupling which are

What is direct coupling?

A direct coupling is one in which the output of one stage of amplifier is connected to the input of second stage in such a way to allow even DC signals from one stage to another. The frequency response of the direct coupled amplifier is similar to low pass filter and is characterized by rise time.

The main disadvantage with DC coupling is, since there is no DC isolation the first stage acts as a biasing circuitry for the second stage, the AC signal current is superimposed on DC quiescent currents and this effect propagates.

What is capacitive coupling?

A capacitive coupling is one in which the output of one stage of amplifier is connected to the input of second stage through a capacitor. This is the most frequently used coupling. The coupling capacitor blocks DC signal propagation across the amplifier and allows only AC signals. This makes the circuit analysis and design simplified and each stage can be considered as isolated as far as DC signals are considered. Also it avoids the amplifiers going into DC saturation.

What is transformer coupling amplifier?

What is miller’s theorem?

The Miller’s theorem establishes that in a linear circuit, if there exists a branch with impedance Z, connecting two nodes with nodal voltages V1 and V2, we can replace this branch by two branches connecting corresponding nodes to ground by impedances Z/(1-K) and K*Z/(K-1) where K = V2/V1. It is shown in the figure below 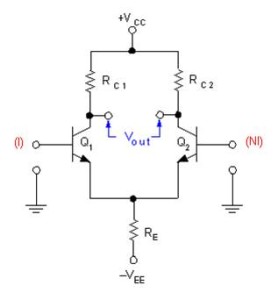 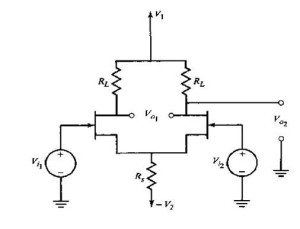 What is CMMR of differential amplifier using BJT? What is the effect of degeneration resistance on CMMR?

It is obvious from the expression of CMMR that increase in emitter degeneration resistance increases CMMR.

What is feedback amplifier?

What is negative and positive feedback?

If feedback from output to input is given in such in a way that the introduction of feedback in the amplifier decreases the overall gain, then the feedback is termed asnegative feedback.

If feedback from output to input is given in such in a way that the introduction of feedback in the amplifier increases the overall gain, then the feedback is termed aspositive feedback.

What are Advantages and disadvantages of Negative feedback?

Some of the Advantages of negative feedback:

f)       Sensitivity will be decreased

The main disadvantage of negative feedback is decrease in overall gain. The gain and feedback factor in an amplifier are often functions of frequency, so the feedback may lead to positive feedback.

Desensitivity factor is defined as the factor with which the feedback desensitizes the gain. It is also called as return difference.

Where Afb is gain with feedback

A is gain without feedback

What is a loop gain in amplifier?