The symbol for an LED is shown in Figure. 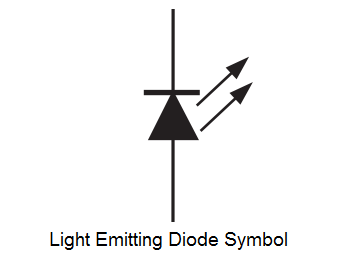 The basic operation of the light-emitting diode (LED) is as follows. When the device is forward-biased, electrons cross the pn junction from the n-type material and recombine with holes in the p-type material. Recall from Chapter 1 that these free electrons are in the conduction band and at a higher energy than the holes in the valence band. The difference in energy between the electrons and the holes corresponds to the energy of visible light. When recombination takes place, the recombining electrons release energy in the form of photons.

The emitted light tends to be monochromatic (one color) that depends on the band gap (and other factors). A large exposed surface area on one layer of the semiconductive material permits the photons to be emitted as visible light. This process, called electroluminescence, is illustrated in Figure 3–29. Various impurities are added during the doping process to establish the wavelength of the emitted light. The wavelength determines the color of visible light. Some LEDs emit photons that are not part of the visible spectrum but have longer wavelengths and are in the infrared (IR) portion of the spectrum. 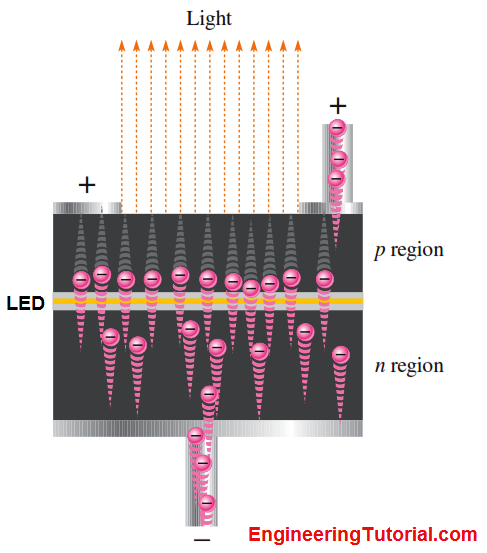 An important class of commercial LEDs that cover the visible spectrum are the III-V. ternary alloys based on alloying GaAs and GaP which are denoted by GaAs1-yPy. InGaAlP is an example of a quarternary (four element) III-V alloy with a direct band gap. 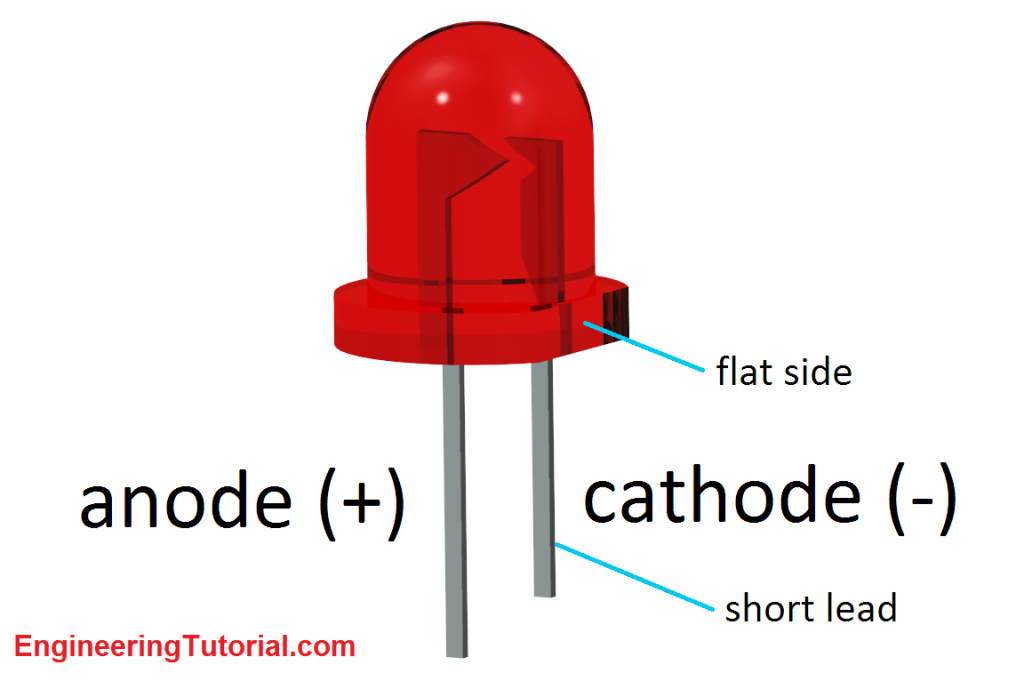 The LED structure plays a crucial role in emitting light from the LED surface. The LEDs are structured to ensure most of the recombinations takes place on the surface by the following two ways.

The LED has to be structured so that the photons generated from the device are emitted without being reabsorbed. One solution is to make the p layer on the top thin, enough to create a depletion layer. Following picture shows the layered structure. There are different ways to structure the dome for efficient emitting.

LEDs are usually built on an n-type substrate, with an electrode attached to the p-type layer deposited on its surface. P-type substrates, while less common, occur as well. Many commercial LEDs, especially GaN/InGaN, also use sapphire substrate.

A very important metric of an LED is the external quantum efficiency ηext. It quantifies the efficeincy of the conversion of electrical energy into emitted optical energy. It is defined as the light output divided by the electrical input power. It is also defined as the product of Internal radiative efficiency and Extraction efficiency.

For indirect bandgap semiconductors ηext is generally less than 1%, where as for a direct band gap material it could be substantial.

The internal efficiency is a function of the quality of the material and the structure and composition of the layer.

LED have a lot of applications. Following are few examples.

Light emitting diodes (LED) in the future have come a long way and currently they are widely used in many applications.

A laser diode, or LD also known as injection laser diode or ILD, is an electrically pumped semiconductor laser in which the active laser medium ...