All materials are made up of atoms. These atoms contribute to the electrical properties of a material, including its ability to conduct electrical current. 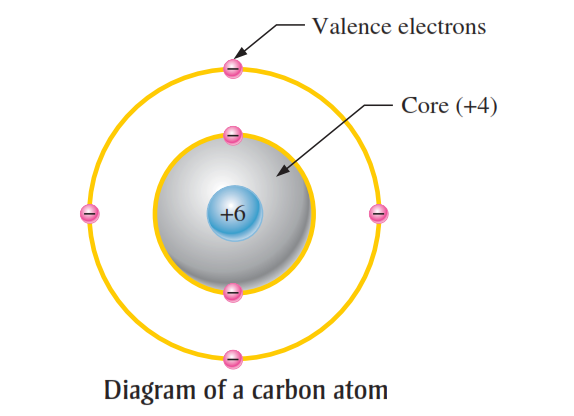 For purposes of discussing electrical properties, an atom can be represented by the valence shell and a core that consists of all the inner shells and the nucleus. This concept is illustrated in above Figure for a carbon atom. Carbon is used in some types of electrical resistors. Notice that the carbon atom has four electrons in the valence shell and two electrons in the inner shell. The nucleus consists of six protons and six neutrons so the six indicates the positive charge of the six protons. The core has a net charge of 4.

An insulator is a material that does not conduct electrical current under normal conditions. Most good insulators are compounds rather than single-element materials and have very high resistivities. Valence electrons are tightly bound to the atoms; therefore, there are very few free electrons in an insulator. Examples of insulators are rubber plastics, glass, mica, and quartz.

1.What is JVM? The Java interpreter along with the runtime environment required to run the Java application in called as Java virtual machine(JVM) 2. What ...