A Conventional fuse will take quite some time to clear the fault an is not suitable for protection of the device. Fast acting semiconductor fuses are connected in series with each thyristor.

A Crowbar circuit is used to protect circuit or equipment under the fault condition. It consists of thyristor of a rating well in higher than the rating of the devices that are to be protected. On detection of the fault, crowbar thyristor is fired consequently fuse blows. Thus the devices are protected against over current. Crowbar protection is recommended for MOSFET circuits.

A crowbar circuit is a method of protecting a circuit against high voltages (overvoltage) in the event of a power supply malfunction or power surge. This is especially useful in a device using TTL components as these are very sensitive to overvoltage. However, there are many other devices which can be damaged by overvoltage.

A typical crowbar circuit is as follows: 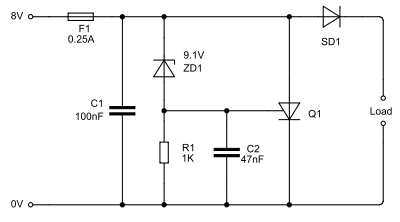 This crowbar circuit has an power supply, and triggers at 9.1V. To change the power supply rating, the zener diode, ZD1, needs to be changed to reflect the new trigger voltage. It should be about 1V higher than the nominal supply voltage.