Symbol:
The thyristor symbol contains the traditional diode symbol with a gate terminal.

The thyristor has a unique four layer construction of alternating P-type and N-type regions. It is given below: 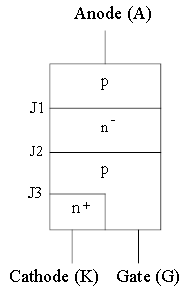 The SCR looks like two PNP transistor connected in a back to back manner. 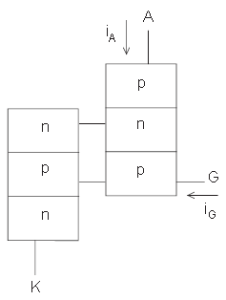 It can be understood with the reference of above figure.

The operation and VI characteristic of Thyristor:
The operation of the SCR is explained by the help of four modes. 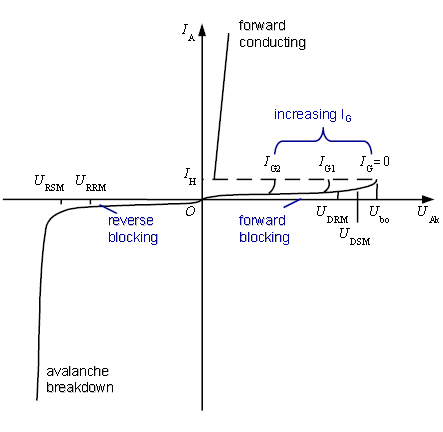 The SCR switching characteristics explains about the turn-on and turn-off loss of the device which is very important factor to be considered for the selection of the device.

Latching Current(IL):
It is the minimum anode current required to switch(latch) the SCR from OFF state t ON state.

Peak Reverse Voltage:
It is the maximum voltage that can be applied across the SCR in reverse biased condition.

Peak Inverse Voltage:
It is the maximum voltage which the device can safely withstand in its OFF state.

Current Rating:
The current carrying capacity of the device is known as its current rating.

What is holding current in SCR? It is the minimum current required to hold the SCR in forward conduction state. When the forward current  becomes ...