Three-phase sinusoidal balanced excitation in 3 stator phases produces a sinusoidally distributed field rotating at the excitation frequency ωs. This field can be viewed as being created by a single equivalent sinusoidal winding which is excited with dc current and which is also rotating. The flux density distribution is represented here by the state vector Bm (or, equivalently, by the magnetizing current Im). It is portrayed in the air gap with shaded colors for which the more intense the color the higher the field intensity and where blues point to the rotor and reds to the stator.

In the synchronous reference frame, all variables appear as dc quantities in steady state. All space vectors are  frozen in space in the shown fixed position based on the assumption that the original stationary and the synchronously rotating reference frames coincide at time t = 0.  These vectors may then be directly associated with the (per-phase) phasors of the induction motor, combined in a phasor diagram, and interpreted by means of an equivalent cicuit made up of a magnetizing inductance in parallel with the rotor leakage inductance acting in series with a resistor. 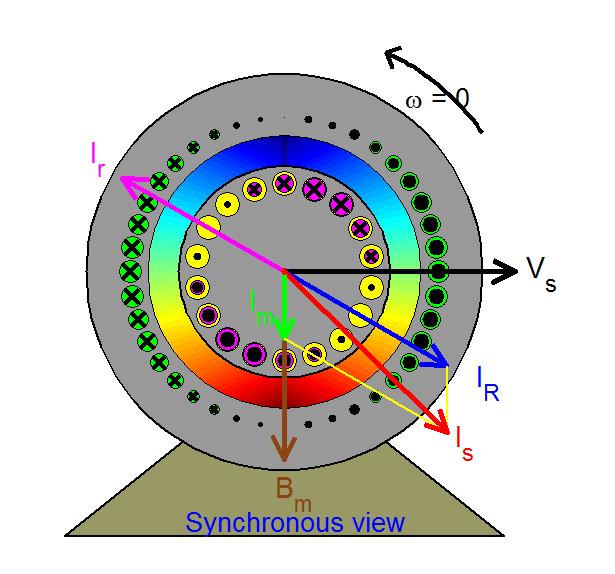